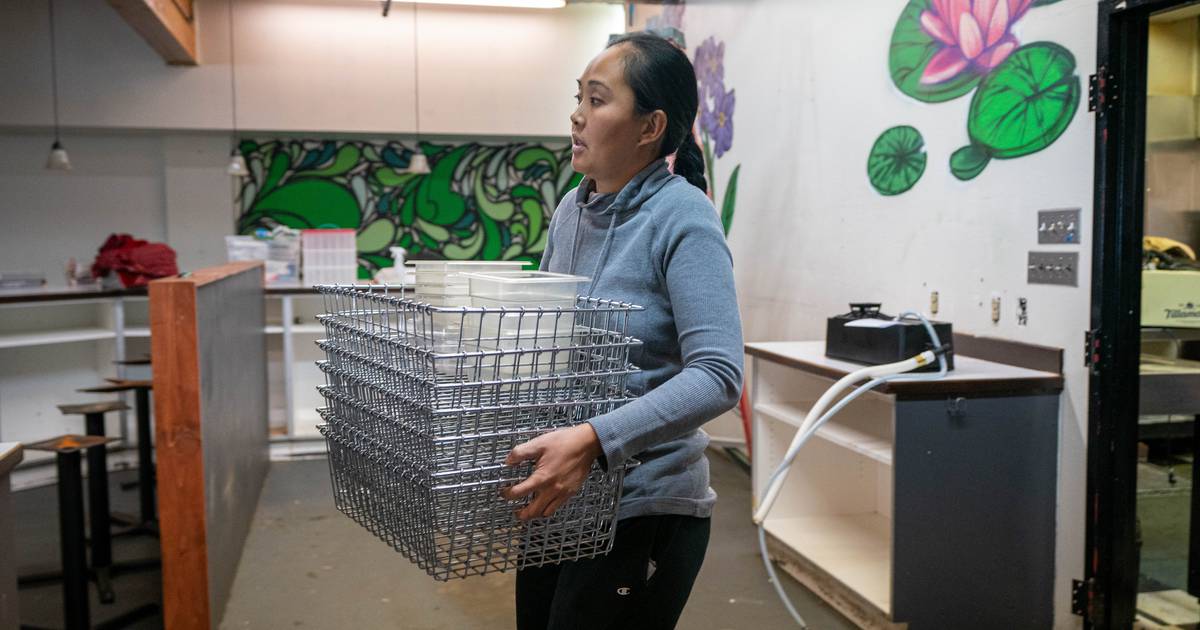 Alaska Bagel Restaurant owner Sandy Xayavongsy moves kitchen items to the front of the restaurant so they can be sold on Tuesday, Oct. 26, 2021 in Anchorage. Xayavongsy said that she was on a month-to-month lease and was told that she had to be out by the end of the month. (Loren Holmes / ADN)

Many small Alaska businesses remain worried about their survival as the pandemic drags on, though the business community overall is feeling better about the future, economic observers say.

In Anchorage, several business owners say they still face a variety of problems, including labor and supply shortages, rising prices and greatly reduced pandemic aid. Sales that shrank and conventions that were canceled during the latest COVID-19 surge, driven by the highly contagious delta variant, have made things worse, they say.

Now that the summer uptick in tourism has subsided, many businesses are “in survival mode” and waiting for better days in 2022, said Jonathan White, owner of SteamDot Coffee Roasters.

“It’s really frustrating because we came out of our initial COVID challenges and everyone would agree we had a darn good summer,” White said. “We had challenges of staffing up, then dealing with the onslaught of business coming back, which was great. But now the delta variant has put us right back to where we were in the peak of the pandemic.”

SteamDot sells coffee wholesale to more than 80 shops and businesses, he said. Some businesses have trimmed orders to cut down expenses. Others are asking for more credit, reducing SteamDot’s cash flow, he said.

“Hopefully, as soon as the city gets healthier again, everyone can think about healthier revenues,” he said.

Jon Bittner, with the Alaska Small Business Development Center, said the coronavirus case counts that ramped up in August caused many groups to cancel conventions in Anchorage and Fairbanks.

That pulled millions of dollars out of the economy, hurting shops and restaurants that depend on that business each fall, he said.

COVID-19 cases in Alaska have begun to level off after peaking in September, but the state’s case rates remain the highest in the U.S., nearly five times the national average. Hospitalizations have hit record levels in the past week.

A annual survey by the business development center has found that a significant number of businesses remain concerned about their survival, Bittner said. The survey will end in the coming days.

About 18% of more than 400 respondents so far report they will likely go out of business in the next six months without a change in the economy or more financial support, Bittner said.

“Conferences have been canceled and people aren’t able to stay open, and we can’t get out shopping like we normally would,” he said. “And we’re seeing increases in pricing and delays in shipping. All that adds up.”

[Supply shortages in Alaska continue, forcing retailers to stock up on goods and hope for the best]

The survey results are similar to last year’s, which responded to a similar question, he said. The economy was in worse condition then, and more federal relief was available at the time.

“It’s a little more concerning this time around, coming at the end of most of the funding,” he said.

On the other hand, this year’s survey has also found that Alaska businessesfeel more optimistic this year that the economy will improve over the next 12 months.

The response to that question was mostly negative a year ago, he said.

“It’s not a huge difference, but it is a shift in perception,” he said. “I think it boils down to the general economy is recovering, but individual businesses are having trouble catching that recovery wave.”

Businesses report being most concerned about finding workers, followed by COVID-19 cases and complications. The next concern was difficulty finding funding, he said.

Some people are still optimistic enough to create new businesses. But some businesses and sectors are having more success than others, said Ralph Townsend, a professor of economics and head of the Institute of Social and Economic Research at the University of Alaska Anchorage.

Restaurateur Ezequiel Rodriguez said that on Friday, he’s launching Alaskan Burger and Brew at the site that previously housed Villa Nova restaurant, near the intersection of Arctic Boulevard and International Airport Road.

Sales have been good at the Manhattan Restaurant and Lounge he opened this summer in South Anchorage. It’s essentially a rebranded version of the Bradley House restaurant, with mostly the same menu and staff, after the previous owner sold the restaurant.

“If you treat customers and employees right, and keep quality food and keep everything safe, we’ll keep busy,” he said.

Alaska Bagel Restaurant owner Sandy Xayavongsy moves kitchen items to the front of the restaurant so they can be sold on Tuesday, Oct. 26, 2021 in Anchorage. Xayavongsy said that she was on a month-to-month lease and was told that she had to be out by the end of the month. (Loren Holmes / ADN)

The pandemic reduced her walk-in business, especially among older clients. The latest rise in cases brought more of that problem and others, including difficulty finding enough workers, forcing her to reduce hours.

“It was just another slap in the face,” she said. “It was like, here we go again.”

With COVID-19 still a problem, she didn’t want to sign a costly, multi-year lease at the restaurant’s Midtown location along Northern Lights Boulevard. The business is moving, she said. Removing and relocating the giant bagel oven will be too expensive, so the bagel production will end.

But Alaska Bagel will continue making the burritos it sells to coffee shops, out of shared commercial kitchens that rent hourly or monthly, she said. With the bagels gone, the business name will likely change next year.

“We are just trying to survive,” she said of the family-owned operation. “We’re always positive but nothing is certain right now.”

Bill Popp, president of the Anchorage Economic Development Corp., said there are bright spots in the Anchorage economy helping many businesses, including booming air cargo at the Ted Stevens Anchorage International Airport. That should do well this winter as international maritime shipping snarls continue.

And while pandemic relief funding is waning, the state will soon distribute up to $90 million in grants to businesses that recently applied, part of a federal relief program, he said.

Still, it will be a tough winter for many businesses, Popp said.

Engin Kilic, co-owner of Ephesus Convenience and Gift Shop in the Hilton Anchorage, opened for business during the coronavirus pandemic in April 2021. Photographed on Thursday, Oct. 28, 2021. (Bill Roth / ADN)

He said if tourism is bad next summer, that will be a “disaster scenario” for many businesses. He said activity has slowed in downtown Anchorage, with tourists gone and conventions canceled.

To get through winter, he may have to dip into savings.

“So I think we will float (by) in winter, use some of our savings and look ahead to summer,” he said.

Dan Hemme, co-owner of Creative Lighting and Sound, said business was improving in the summer, thanks to events in the Palmer-Wasilla area. He provided sound production at the Alaska State Fair in August. That was a big deal, he said.

“But then once we had the uptick (in cases), the events I had pretty much canceled,” he said.

Profits are about one-fourth what they were pre-pandemic, he said. He’s getting by selling sound and lighting equipment to churches and others groups.

With little debt, he can operate in “neutral” until things improve, he said.

The American Cancer Society of Alaska recently held an event at the Hotel Captain Cook downtown. It was the first live, nonprofit fundraiser he’s worked at in a long time, he said.

He thinks more events will pop up next year. “Hopefully, this is just the start,” he said.