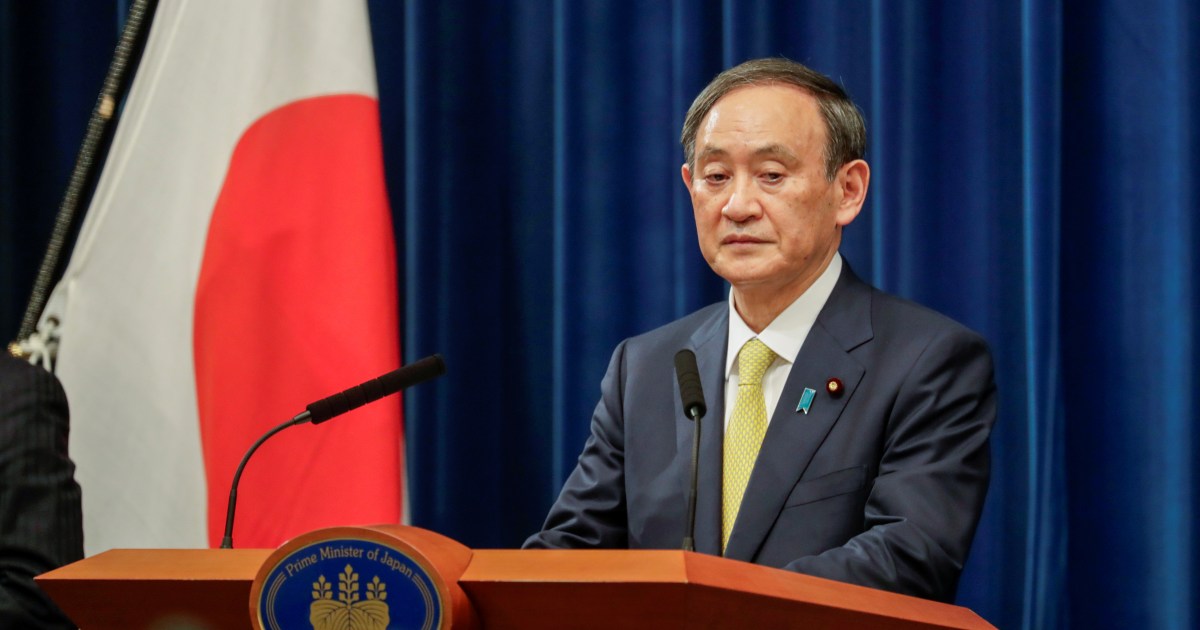 Japan will compile a fresh economic stimulus package worth 73.6 trillion yen ($708bn), Prime Minister Yoshihide Suga said on Tuesday, signalling his resolve to pull the country out of its coronavirus crisis-induced slump.

The new stimulus package will include fiscal spending worth around 40 trillion yen ($384.2bn), Suga said in a meeting with ruling party executives.

The government is set to finalise the stimulus package later on Tuesday, which would follow a combined $2.2 trillion from two previous packages that focused on dealing with the immediate strain on households and business.

The package is likely to include subsidies and incentives to prod companies to boost green investment and spending on digitalisation, an area Suga has laid out as his key policy priorities.

The announcement of the stimulus came as the government announced an improvement in its third-quarter economic performance.

Gross domestic product (GDP) surged by an annualised 22.9 percent in the July-September period, better than Tokyo’s initial estimate of a 21.4 percent expansion.

The growth was driven by a rebound in exports and consumption from the slump caused by lockdown measures to contain the virus that in turn caused Japan’s worst post-war contraction in the second quarter.

Japan’s household spending rose 1.9 percent in October from a year earlier. But that figure fell short of a median market forecast for a 2.5 percent gain, though it was the first rise in 13 months, a sign the economy is gradually emerging from the damage caused by the first wave of coronavirus infections.

The increase was mostly in reaction to a slump in spending in October last year, when households slashed consumption after a sales tax hike that took effect that month.

But a recent resurgence of infections is clouding the outlook, keeping policymakers under pressure to support a fragile recovery with enormous monetary and fiscal stimulus measures.

“Japan’s economy will keep growing in the current quarter but may stagnate or contract in January-March,” if an increase in infections force the government to take stronger steps to contain the virus, said Takeshi Minami, chief economist at Norinchukin Research Institute.

Real wages fell in October for the eight straight month, separate data showed, suggesting households are not immune to the hit to corporate profits from the pandemic.

With the economic recovery looking fragile, the Bank of Japan is expected to maintain its large monetary stimulus programme and consider extending a range of schemes aimed at easing corporate funding strains as early as its rate review next week.

The stimulus package could also be a means to ensure the prime minister’s political survival, according to the Bloomberg news agency. Suga needs his own mandate after taking the helm of the the governing Liberal Democratic Party four months ago, when Shinzo Abe stepped down because of ill health. That means he needs to keep the economy supported until September, the likely date for a nationwide poll.

Sentiment among Japanese manufacturers and service-sector firms in December improved to its least pessimistic since February, as businesses eyed a slow and bumpy recovery from COVID-19 disruptions, a Reuters poll showed on Tuesday.

Both sectors expect conditions to stay negative into next spring, with respondents’ negative comments about business outnumbering positive ones, according to the monthly Reuters Tankan, which tracks the Bank of Japan’s (BOJ) closely watched Tankan quarterly survey.

The Reuters Tankan sentiment index for manufacturers improved to its highest since February in December, rising to minus nine from minus 13 in the previous month. But the index still stayed in negative territory for a 17th straight month.

Manufacturers highlighted worsening conditions in capital spending due to the coronavirus’ hit to demand in the poll of 485 large- and mid-sized companies. 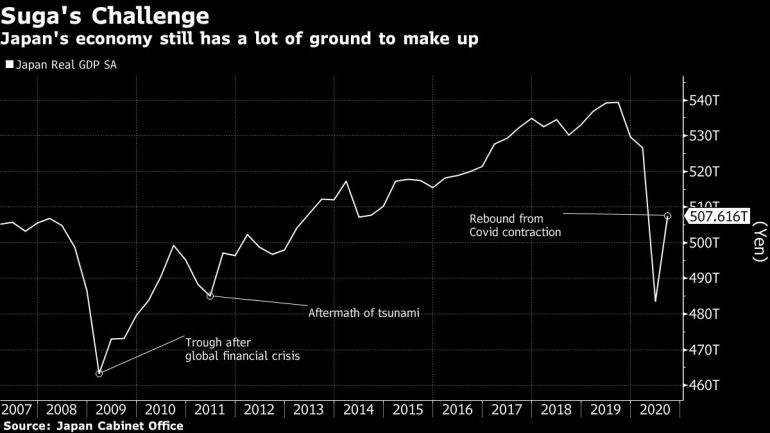 [Bloomberg]The service-sector index showed a more significant improvement, rising to minus four from 13 in November, also its highest since February, with sentiment among all sub-sectors coming in better than in the previous month.

The Reuters Tankan index readings are derived by subtracting the percentage of respondents who say conditions are poor from those who say they are good. A negative reading means pessimists outnumber optimists.

The BOJ, which lowered its economic growth and inflation forecasts for the current fiscal year at its last policy meeting, is due to release its own fourth-quarter Tankan survey results on December 14.

The central bank’s third-quarter survey showed corporate capital expenditure plans by companies of all size and industry for the current fiscal year were at their weakest since the 2009 global financial crisis.