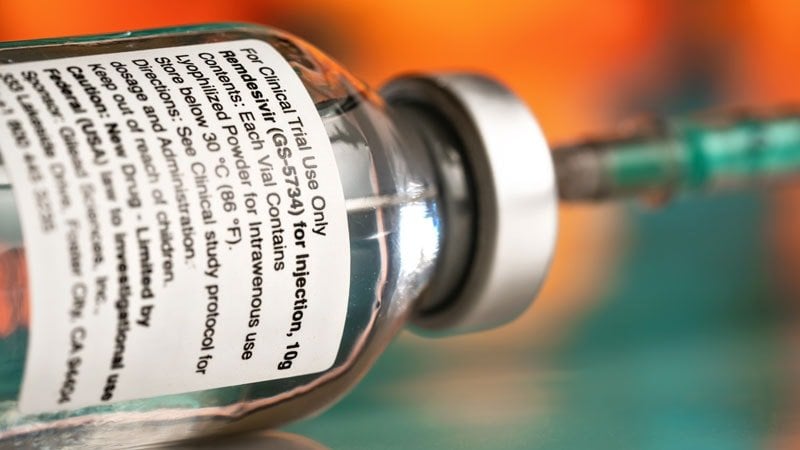 A lack of consensus in the evidence regarding the antiviral remdesivir (Veklury) to treat people with COVID-19 continues, leaving clinicians without clear direction on one of the few treatments for the illness approved under US Food and Drug Administration (FDA) emergency use authorization.

The latest research comes from Michael Ohl, MD, MSPH, and colleagues who studied a large group of VA patients hospitalized with COVID-19. Compared with a matched group of veterans who did not receive the antiviral, remdesivir did not significantly improve survival.

The percentages were close: 12.2% of patients in the remdesivir group died within 30 days compared with 10.6% of those in the control group.

At the same time, the retrospective cohort study showed remdesivir was associated with more days in the hospital.

“There is still uncertainty about the role of remdesivir in treatment for people hospitalized with COVID-19,” Ohl told Medscape Medical News.

“It is reasonable to follow the CDC and Infectious Diseases Society of America guidelines for remdesivir use, “but clinicians should avoid admitting people or keeping people in the hospital solely to receive remdesivir if they do not meet other criteria for hospitalization,” said Ohl, lead author and an infectious disease specialist at the Center for Access & Delivery Research and Evaluation, Iowa City Veterans Affairs (VA) Health Care System in Iowa City.

The study was published online today in JAMA Network Open.

Sticking With the Official Protocol?

The longer hospital stays associated with remdesivir, a median 6 days vs 3 days, could be a result of treating people for 5 or 10 days with the antiviral agent. In other words, it is “possible that clinicians were not discharging patients who otherwise met the criteria for hospital discharge until the remdesivir course was completed,” Ohl and colleagues note.

Not doing so, they add, could have resulted in “increased used of scarce hospital beds during the pandemic.”

“The recommended remdesivir treatment course is a somewhat arbitrary 5 or 10 days depending on illness severity, and remdesivir is currently available only as an intravenous formulation for use in health care settings,” they add.

This is the “most likely explanation,” notes Gio J. Baracco, MD, in an invited commentary accompanying the study.

At the time of the study, use of remdesivir also required patient consent, close adverse event monitoring, and ongoing testing, Baracco notes.

He added that an option to discharge patients earlier if they responded to treatment might have been lost in translation from clinical trial protocol to real-world use in the VA system.

While a large clinical trial protocol called for the remdesivir infusions to be stopped early if the patient met the primary outcome and was ready to be discharged, “this detail was not adequately translated to the clinicians treating these patients,” added Baracco, who’s with the Division of Infectious Diseases at the University of Miami Miller School of Medicine and the Miami VA Healthcare System, Miami, Florida.

Another large study, the World Health Organization Solidarity Trial, found remdesivir was not associated with shorter hospital stays or improved survival compared with standard of care. For this reason, the WHO recommends against use of remdesivir.

In contrast, the double-blind, randomized Adaptive COVID-19 Treatment Trial (ACTT-1) linked remdesivir treatment to shorter stays in the hospital, a median 10 days vs 15 days in a placebo group.

The FDA included the 2020 ACTT-1 in its consideration for remdesivir emergency use authorization. The FDA issued the EUA in May 2020, followed by full approval as the first treatment indicated for COVID-19 in October.

When asked by Medscape Medical News why the VA and ACTT-1 studies yielded different results, Beigel cited two reasons. The timing was different, with the VA study starting after the remdesivir EUA was issued and ACTT-1 findings were announced

“So at that point, clinicians understood those populations most likely to benefit from remdesivir. The use of remdesivir likely did not occur at random; it was likely to be more commonly used in those who were sicker or at higher risk for poor outcomes,” said Beigel, associate director for clinical research in the Division of Microbiology and Infectious Diseases at the National Institute of Allergy and Infectious Diseases (NIAID).

In addition, the studies evaluated very different populations, he said. The differences in median duration of hospitalization between the trials reflects this, Beigel added.

Furthermore, when asked if he thinks the new evidence should affect clinical use of remdesivir, Beigel replied, “No. Observational studies even with adjustments such as propensity score matching are not equivalent levels of proof compared to randomized trials.”

Ohl and colleagues identified patients admitted to one of 123 VA hospitals for the first time for COVID-19 from May 1 to October 8, 2020. Each had a PCR-confirmed SARS-CoV-2 infection. The researchers then compared 1172 patients receiving remdesivir to another 1172 patients not receiving the agent.

Those receiving remdesivir were more likely to be older, White, have chronic obstructive pulmonary disease and have more severe COVID-19. A total 94% of the remdesivir group were men.

“Over 90% of the people included in VA study were men, mostly over the age of 60,” Ohl said when asked how generalizable the findings would be to a non-VA population.

“There is no obvious biological reason that remdesivir should have different effects in men and women, but we should be cautious about extrapolating study findings to women and younger individuals,” he added.

Limitations of the study include its observational design, which makes unadjusted confounding based on illness severity a possibility. In addition, the investigators were unable to identify specific subgroups that might benefit from remdesivir treatment.

The data did suggest that remdesivir was more effective earlier in the course of disease when patients required supplemental oxygen and before need for mechanical ventilation.

Baracco pointed out the contradictory findings in his commentary: “The real-life application of a drug promising to hasten discharge from the hospital as its primary beneficial outcome must include an assessment of how easy it is to do so and make it clear that once a patient reaches that point, they can discontinue the drug.”

“The paradoxical findings in the study by Ohl et al compared with the study used for its authorization illustrate this point very clearly,” he adds.

Damian McNamara is a staff journalist based in Miami. He covers a wide range of medical specialties, including infectious diseases, gastroenterology, and critical care. Follow Damian on Twitter:  @MedReporter.