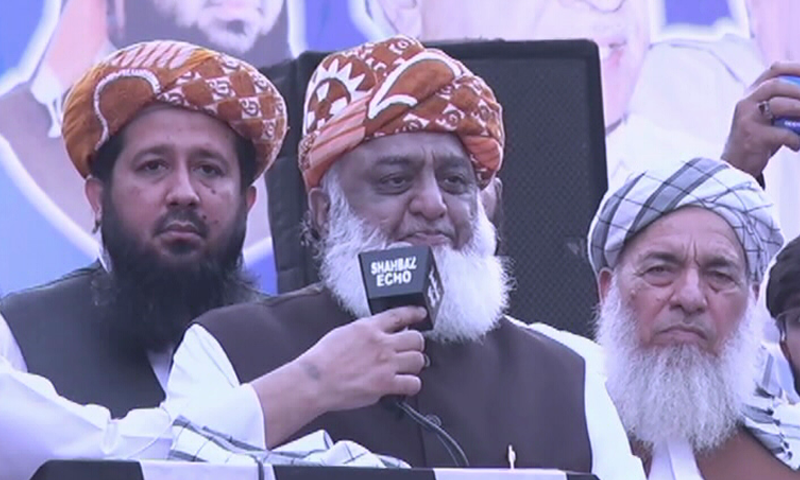 Pakistan Democratic Movement (PDM) president Maulana Fazlur Rehman said on Saturday that the opposition alliance was fighting a war for the country’s survival and represented the nation’s hope and voice.

“We have to support the nation in this crisis,” the Jamiat Ulema-i-Islam-Fazl (JUI-F) chief said while addressing a PDM rally in Karachi, which is the first in a series of country-wide protests announced by the opposition alliance. Saturday’s rally will be followed by one in Quetta on November 17, Peshawar on November 20 before it moves on to Lahore and Islamabad.

The PDM chief warned that the country was heading towards isolation and the political leadership should play its role to avert the crisis.

He criticised the government for rising inflation in the country, which he claimed had led to children being sold because of parents’ inability to provide for them.

“Nations are strengthened … when their economies are stable and the people are prosperous but look at where this country is being taken,” he said. “We are spending day and night by begging.”

The JUI-F chief also said that the country’s institutions should “repent on past mistakes and ask the nation for forgiveness”.

“We also want to say to the institutions that they should understand the realities and reassess their role,” he said.

Last week, the PDM decided to launch anti-inflation rallies across the country, which would culminate in a march towards Islamabad.

Earlier this week, Punjab Chief Minister Sardar Usman Buzdar said that the PDM had lost its residual credibility by indulging in negative political agenda and this proves that it has no future.

“The PDM was unable to manage as many people as are parties in the alliance. The people’s disinterest shows that they need development and prosperity instead of chaos and instability,” the CM said.