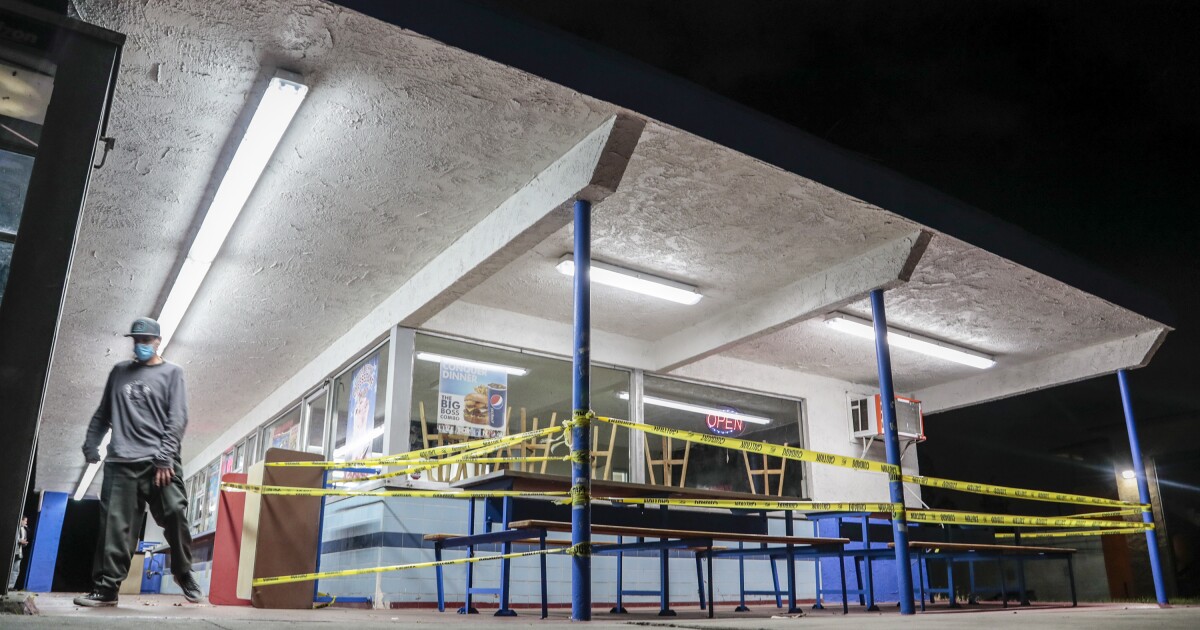 Few people came to symbolize the frustration, fear and anger of restaurant owners to the ban on outdoor dining than Angela Marsden, owner of Pineapple Hill Saloon & Grill in Sherman Oaks.

When Los Angeles County imposed the rules in the wake of a deadly spike in COVID-19 in November, she became world famous for a video she posted in which she tearfully described how the ban was upending her business and questioning the fairness of closing her down while catering services for a Hollywood shoot operated nearby.

“I’m losing everything. Everything I own is being taken away from me, and they set up a movie company right next to my outdoor patio, which is right over here,” she said in the viral video. “And people wonder why I’m protesting and why I have had enough…. We cannot survive. My staff cannot survive.”

On Monday, Marsden was again fighting back tears — this time of joy and anxiety — as she talked about being able to reopen.

“I don’t want to get overexcited. I just don’t know what’s going to happen next,” Marsden said. “But if they were to let us open and keep us open outdoors, and not shut us down again, it definitely would give hope to me and to other businesses.”

It was a Monday of hope for restaurant owners and other merchants who have seen very little in recent months. Gov. Gavin Newsom lifted the statewide stay-at-home order, and Los Angeles County officials said outdoor dining would be allowed to resume by Friday.

The electrical equipment she used to power her patio setup got rained on, so she’d have to sort that out. Tables needed to be cleaned. Staff had to be called back — and there’d be no guarantee they’d be available.

If she was short-staffed, Marsden said she’d wait tables herself. That’s what she did in October when outdoor dining was in place and business began to pick up.

“I’ll do whatever it takes to keep my business going,” she said.

Still, she said the frequently changing policy gnaws at her: “There’s so much stress … never having the security of knowing when they’re going to pull it out from underneath you again.”

L.A. County health officials suspended outdoor dining in late November, prompting immediate outcry from pandemic-battered restaurateurs and pushback from residents and some politicians. Legal action — including a suit involving Marsden — since then has aimed to overturn the order.

Shortly after the county’s ban went into effect, the state handed down the regional stay-at-home order, which widened the outdoor dining prohibition and imposed a host of new restrictions across Southern California.

County officials admitted they were concerned about reopening outdoor dining given the toll COVID-19 has taken this winter. More than 5,000 people have died in the last month alone, and hospitals have been pushed to the brink. But both cases and hospitalizations are now on the decline.

“Please don’t take this news to mean that you can return to life as normal,” said L.A. County Supervisor Hilda Solis. “Masks, physical distancing and limiting activities are still key to getting out of this pandemic until we can get everyone vaccinated.”

Added Los Angeles Public Health Director Barbara Ferrer: “This is not the time for people to think we can get back to our normal business and our normal ways of interacting with each other. If we’re not careful, our metrics that are headed in the right direction will quickly change. So, please, do your part to allow us to move forward with careful reopenings.”

Spartina chef-owner Stephen Kalt has about 75 seats on his Melrose Avenue patio that he’s eager to fill as soon as possible. If allowed, Kalt also plans to reopen his restaurant on Friday.

“I’m ecstatic and happy to get to open,” he said. “We’ll order food and start to prep and let everyone known to go get tested” for COVID-19.

Kalt says he had to lay off 40 people when outdoor dining was banned in November. Now, he says he can bring a good portion of his staff back as business picks up.

“I’m trying not to dwell on the hardship, but it’s costly,” he said. “We burned through tens of thousands of dollars in the last couple of months. It’s prohibitively expensive to close an ongoing business.”

“Now I can rehire or bring a lot of my existing staff members back into the rotation,” said Mark Okuda, chef-owner of The Brothers Sushi in Woodland Hills. Okuda said he spent about $150,000 turning his parking space and storage area into the restaurant’s outdoor dining area last summer.

“It was something that we had in mind for a while but with the lockdown, we thought we would not be allowed to do indoor dining for a really long time,” he said.

He was able to keep a steady business going between July and November before the second lockdown. The restaurant, which specializes in a high-end omakase sushi experience, had to shift to a takeout-friendly model of chirashi boxes and handroll kits.

“We have to regroup back into the dining in mindset and really look at what’s in season,” he said. “For takeout we couldn’t really serve fried items and we had to do stuff that would last longer. It’s been good to think of menu ideas and get the staff ready.”

But not every restaurant is racing to open its doors.

Percell Keeling, who owns Simply Wholesome restaurant in Windsor Hills, says he isn’t planning to open his patio just yet. Keeling has kept his patio closed since the first lockdown in March.

“This whole thing has been kind of a seesaw. Every week it’s something different,” he said. “I think that I will ride it out a bit longer and get a sense of what’s going on out there before I make that decision.”

In addition to the changing mandates, Keeling is also worried about the health and safety of his staff. “I just can’t afford to take the risk,” he said. “Taking the chance for a few dollars is just not worth it.”

Since the outdoor dining ban was first announced, some have demanded to see the data justifying the move and questioned whether its benefits justified the economic devastation.

“People have lost their jobs, and if restaurants and bars continue to close, they will lose them permanently,” the Independent Hospitality Coalition said in a statement Monday.